If there was such a thing as The Institute of Good Times and Competitive Socialising, then Swingers would definitely be a miust-visit for all fun-loving Londoners. No, it’s not a strip club as the name might suggest. It’s actually a really fun crazy golf course!

Having seen images of it, I was very keen to channel my inner Rory McIlroy there and as luck has it, I received an invitation to take part in a Crazy Golf tournament.

Having hastily cobbled together an all-male team of 4 at the last minute, we met up outside a nondescript entrance beside the iconic London skyscraper, The Gherkin, with a sense of excitement and anticipation.

Not really knowing what to expect beyond the gold course, I felt the sensation of warping back through time as soon as I crossed the threshold and headed downstairs. The art decor and prohibition style posters reminded me of decadent days of the rip-roaring 1920’s. Swingers is definitely a classy place, so classy even the Great Gatsby would be impressed. It’s the opposite to the cool and edgy vibes of The Junkyard Golf Club in Shoreditch. 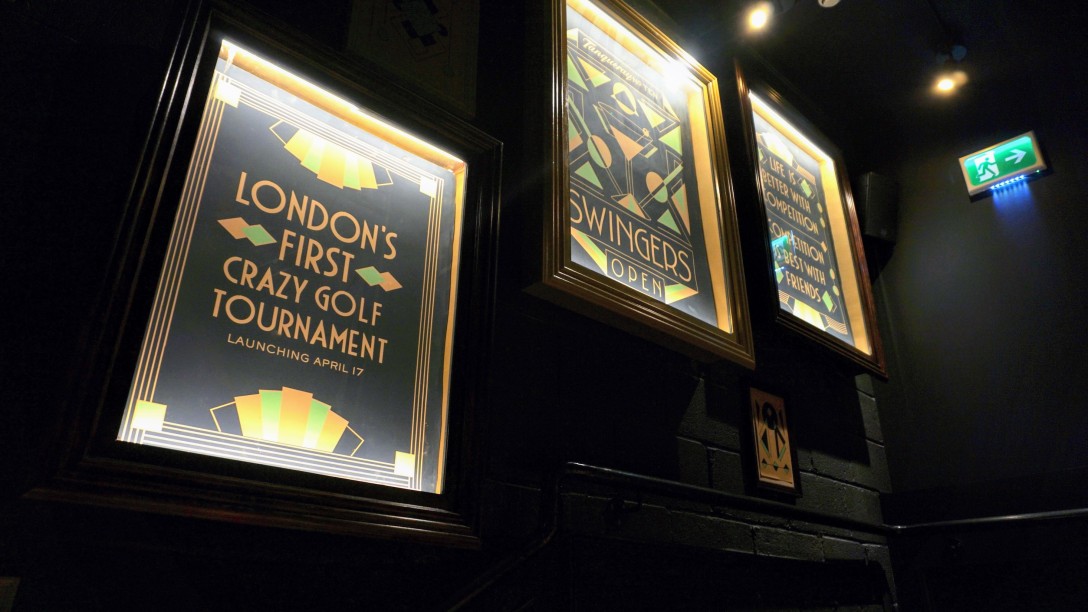 Having checked-in and taken up our place in the private area where we were treated to some incredible food and cocktails (more on that later), our first major challenge was to come up with a team name. After much head-scratching and deliberation, and being an all-male team (where were all the ladies at?!) we finally settled on a team name: 4 Guys, 1 Hole (sniggers). If we were to win anything, it would surely be for best team name of the night. 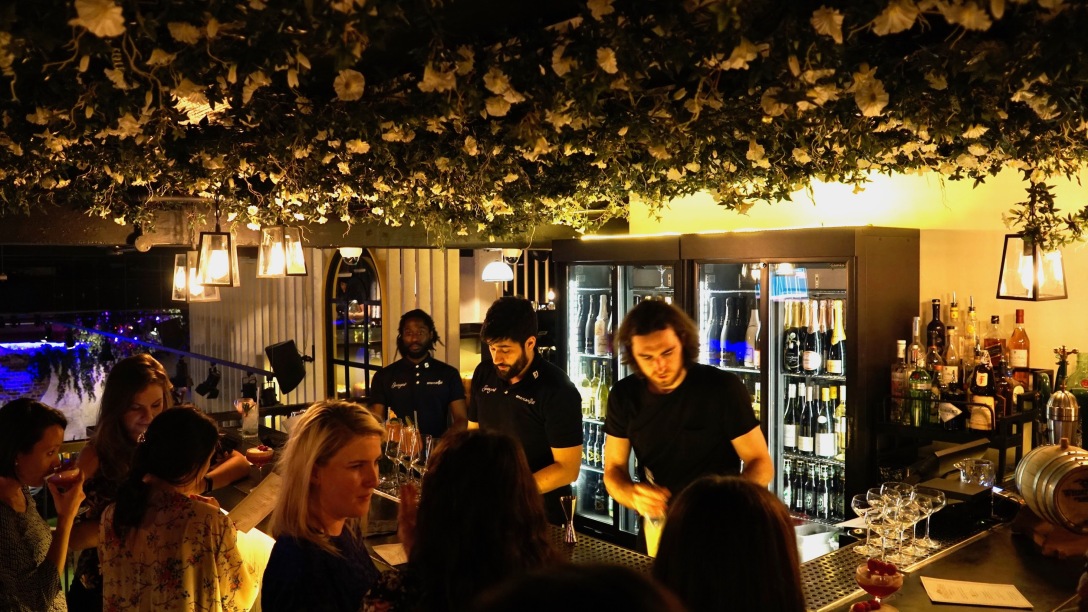 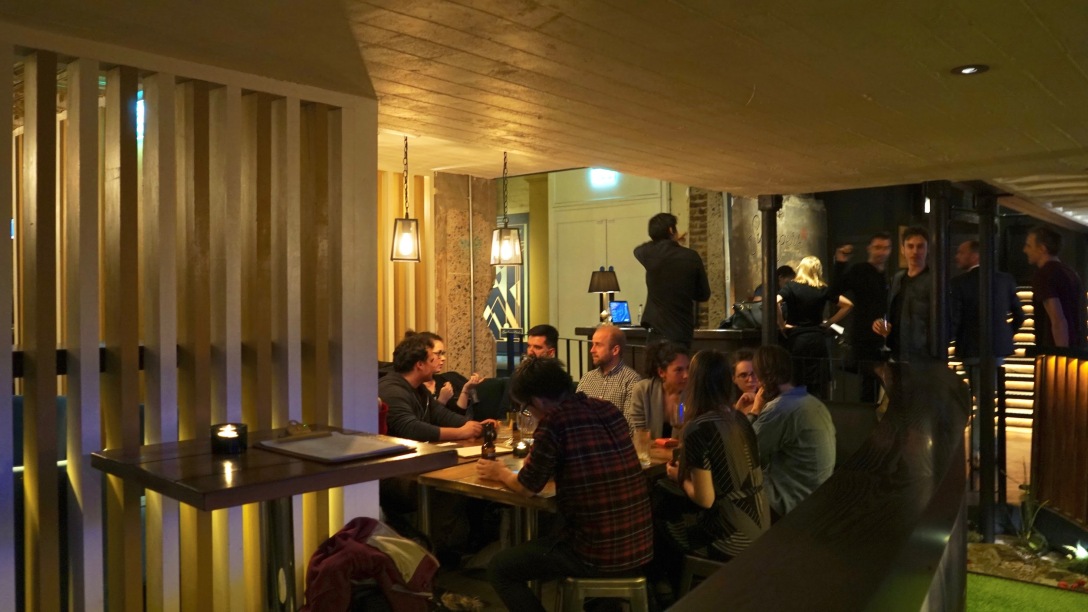 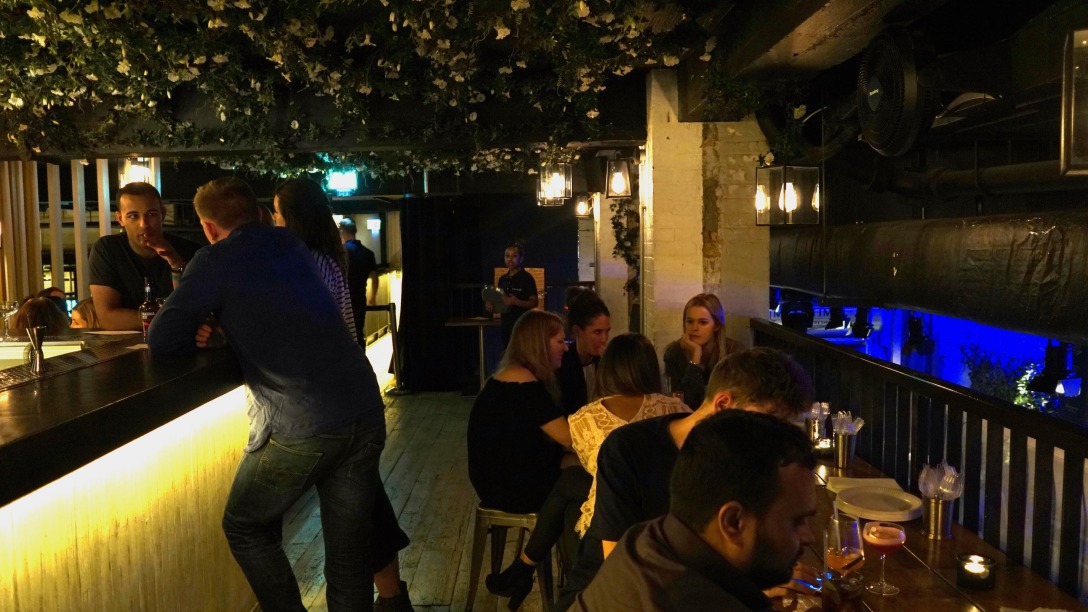 After much chit-chat and anticipation,  game time was upon us and after being introduced to the rules of the game by our caddies, team 4 Guys, 1 Hole were off. We would have to guide our golf balls over a 9-hole course. I could see our spectacular performance in lights now.

However, no sooner had we started did our confidence begin to dip faster than United Airline’s customer ratings. The courses were pleasingly/fiendishly challenging. Yours truly started steadily. Unspectacular but so far have managed to avoid any mishaps. Things were looking promising. 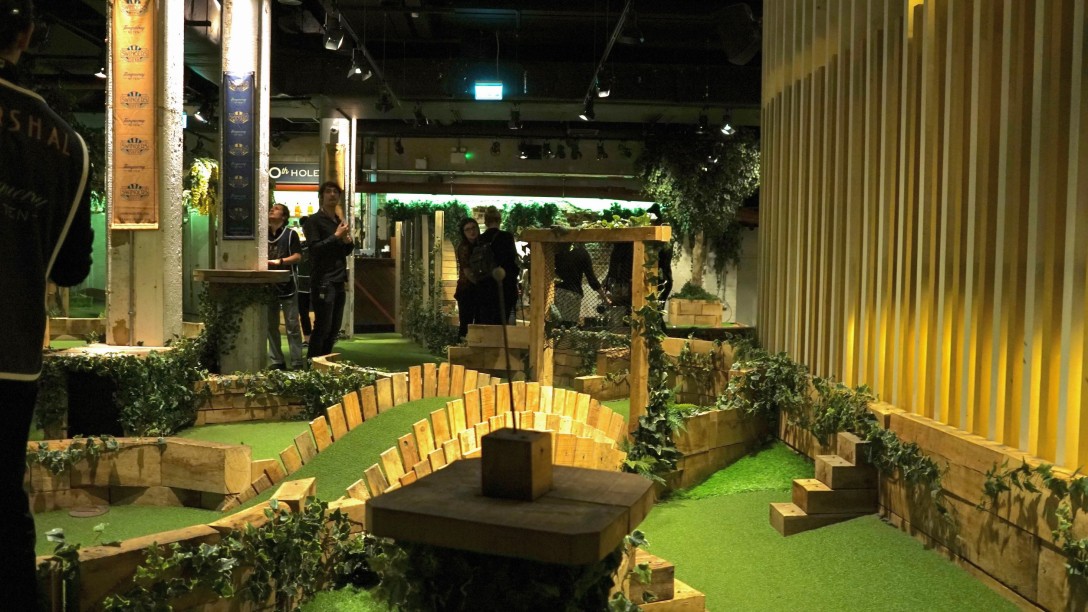 We had to guide our ball through a medley of fiendishly tricky obstacles including loops, a lighthouse, ramps, bridges and, what I shall call, the sandpit of death’ (more on that later). It’s wacky, quirky and, most importantly, as fun as it sounds. 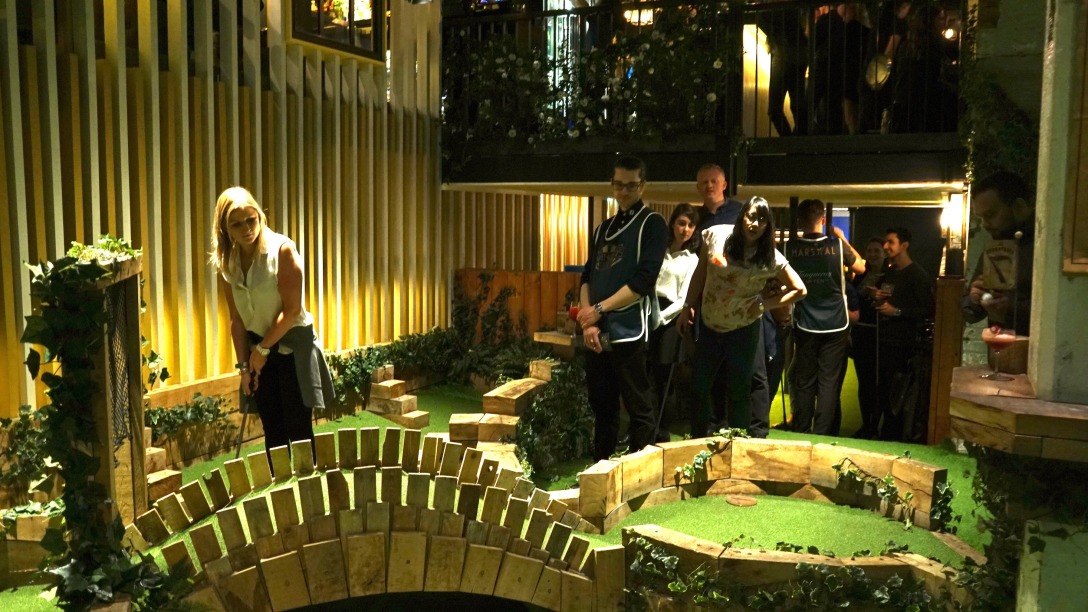 Some were so challenging it required a team discussion on the best way to navigate.

I was doing ok.  I was optimistic that if our team did not win the championship, I would at least stand a chance of coming first and secure bragging rights. Then came the ‘sandpit of death’.  Ah, the sandpit of death. We were told by our caddie that this was the hardest hole on the course. Pfff, yeah right! Hold my cocktail!

She was right, of course. The penultimate hole offered a tempting shortcut to the hole. You had to use the right level of power to hit your golf ball so it launches off the ramp, over the sandpit and safely onto the other side. Too little power and you’ll end up in the pit. Too much power and the ball could rebound off the backboard and back down into the sandpit or roll depressingly back downhill down the side back to where you started.

Up first, my good friend. What followed was unbridled joy and entrance into Swingers folklore as he manages a hole-in-one on the hardest hole! “Good job!” I congratulated, turning green with envy at this moment of genius.

Cursing inside at his incredible masterstroke, I stepped up to the tee. From then on, I’m afraid it all went downhill (lol) from there. My first shot went into the sandpit. Shit! Struggling to claw back some sense of repose, I tried again. Too much power. Damn Again, I tried. Back down the hill! I was throwing all my  ‘hard-work’ down the drain (or sandpit in this case). By this point, the alarm bells in my head was ringing louder than a sinking ship and I’d lost my head.

The rules of the game permitted 6 strokes for each player on each hole. I didn’t make it 😭 I wanted to blame the course in some way. Maybe one blade of artificial grass was longer than the others? In reality, every course was so well constructed (good job Swingers), I had no excuse. Perhaps it was the cocktail? Yeah, was definitely the cocktail 😂

Despite my tragic end, I finished my rest of the course with the same sense of fun as the 8 holes that went before.

Convinced that I would probably end up last, I was surprised to learn that I remarkably held on to 3rd spot! Needless to say, we didn’t win the championship which only highlighted how badly we needed a female team member to show us boys how it was done.

Still buzzing from the huge amount of fun on the fairway, we checked out the rest of Swingers to discover that the venue is more than just a Crazy Golf venue. Spread over 2 floors, there’s an uber stylish bar on both floors, a buzzing dining area, a swish lounge area and plenty food stalls. Even if you’re not up for a round of golf, you’re still in for a good time here especially with the cocktails and food on offer.

Speaking of food, it’s stellar. Heard of Patty & Bun? Of course you have. These guys have been serving some of London’s foodgasmic burgers for a while. Pizza more your thing? Then let the folks a Pizza Pilgrim satisfy your cravings.  The cocktails aren’t bad either with a selection of sweet, potent, refreshing and fruity options. Just look for yourself! 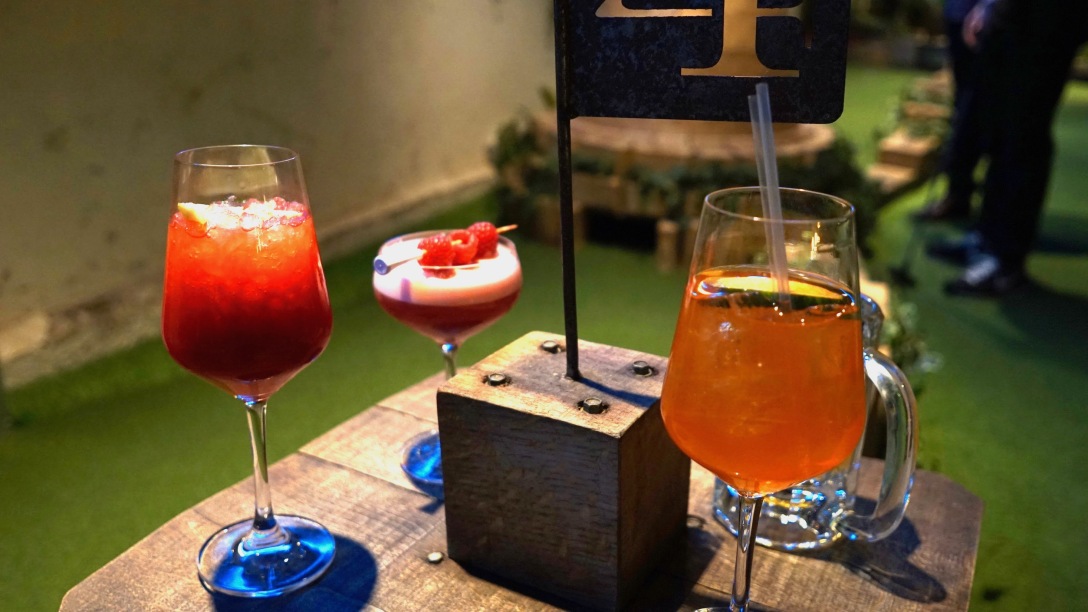 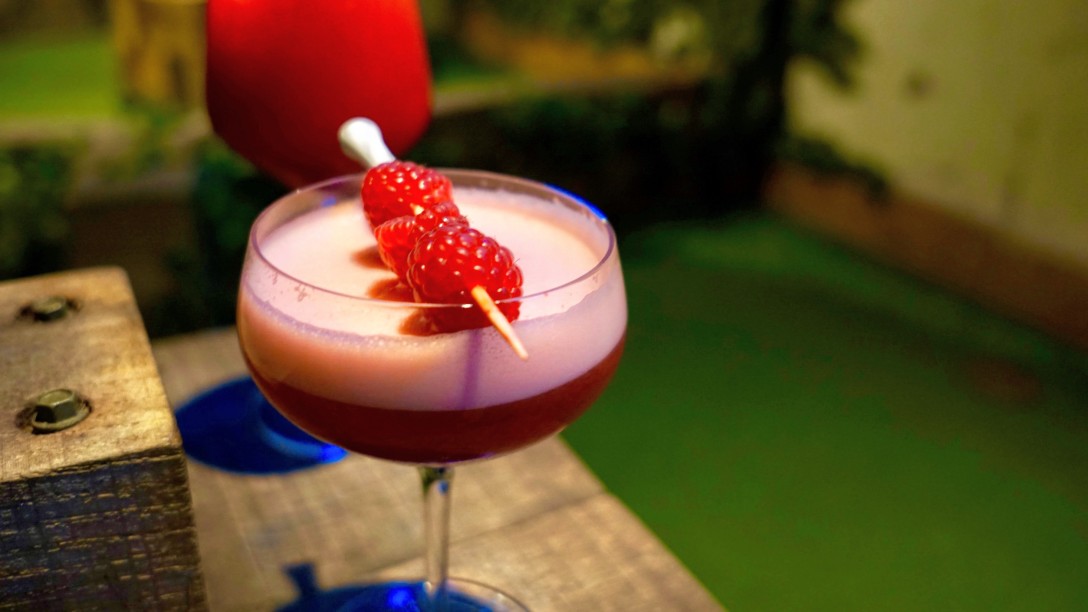 This might seem a little strange but one of the stars of this place are the caddies. They don’t just stand there, hold your clubs, bring your drinks and keep your score. Their enthusiasm, energy and character really help the fun along. They’re the kind of people who could make watching paint dry sound exciting. If you’re nice enough, they might even impart some very sound advice. Advice which I perhaps should have heeded!

Despite my tragic ending, Swingers was so much fun. Is there a better way to tee off the week? It’s going to be pretty hard to top this. You might come feeling pretty competitive, keen to impress with your golfing prowess but you’ll be having so much fun, you’ll quickly forget about keeping the scores.  I strongly recommend it for any fun occasion with your mates.

Have you tried your hand at Swingers Crazy Golf? I’d love to hear your story and how you got on (and your team name!).

4 thoughts on “Swingers: A Tale of Fun and Tragedy”