Where in London do you go if you want a piece of New York City? Brixton. Yep Brixton.

Until the end of December at least, Londoners with a serious case of wanderlust can get a slice of the Big Apple without coughing up a fair chunk of their monthly paycheck on air tickets to the US and A 🇺🇸

As a Timeout Tastemaker, I went ahead and duly checked this place out. It sounded promising and I was looking forward to seeing what it was all about.

It’s easy enough to get to. It’s only a five munites walk from Brixton tube station. But the entrance is pretty conspicuous, opposite a public lavatory. How glamorous.

Big ignore that, climb up the steps and you’ll find that Big Apple Brixton is a Pop-up nightlife area bringing the vibe of New York to London. Its got its own ‘record store’, ‘strip club’ (minus the seediness), and ‘barber shop’. Its even got its own ‘night club’. They aren’t really the aforementioned, but rather a recreation of those buildings complete with interiors to reflect that.

But this isn’t just the bright lights of New York as we know. It’s been given a retro makeover to recreate the 1970’s (I think). They’ve even included retro street signs, traffic lights and metro signs around the venue. A nice touch.

For me, I’m all for immersive experiences and this was right up my street. You can even go inside these make-believe buildings and sit inside. Whoever the organisers are, they’ve done a pretty good job when it comes to details. 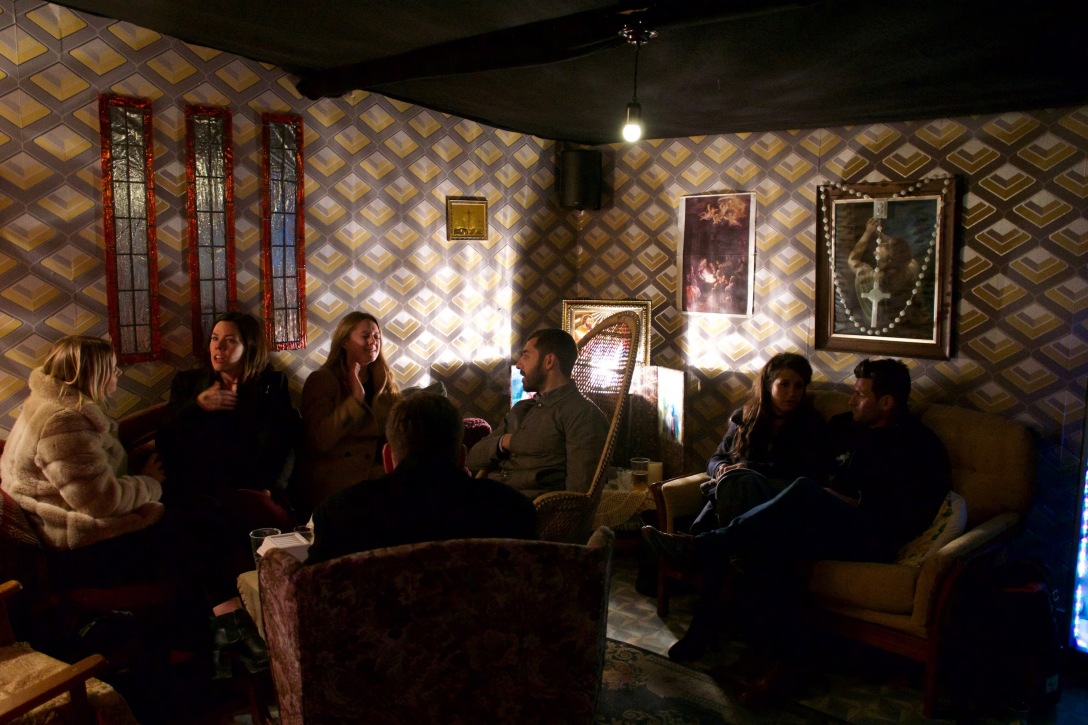 The bar is pretty good too. I counted four with a pretty extensive drinks list so you won’t be going thirsty anytime soon. There’s even mulled wine and mulled cider just in time for Christmas. If food is more your thing, then they have that too. Admittedly, there isn’t a huge array of choice but what is on offer is pretty darn good and fitting of the Big Apple. Nothing beats the ‘Greedy Bear’ burger from the folks behind ‘Bear Burger’. The animal kingdom packed between two buns with gooey cheese in between. Pretty monstrous, but since when has that ever stopped hungry Londoners?

I’ve been reliably told by the security chaps at the front door that Thursday is the best day if you just want a casual meet-up with your mates which is fine by me. If you’re more of a party-goer, then Friday – Sunday is where it’s at. The atmosphere can be a flat on Thursday night but I’m not much a night-clubber anyway and was having too much of a good time to have that affect me.

The downside? It’s pretty cold on a Thursday night. You are under cover so you won’t have to race for cover if the heavens open up. But still cold. So wrap up warm.

Check it out if you’re in Brixton. It’s only around till Christmas so get moving!

You can read my review of Big Apple Brixton along with other reviews from my fellow Tastemakers here if you’re feeling so inclined.