I challenge anyone to find a show more daring, more silly, more sexy than Barbu and I good luck to those who tries as there aren’t be many shows that can top it on those fronts.

Barbu is a cabaret show taking place at the annual London Wonderground, London’s bastion of cabaret, circus and burlesque and alternative comedy venue on the Southbank performed by the Cirque Alfonse circus company from circus powerhouse Quebec, Canada.

It’s a 1 hour and 15 minute long show of witty skits, death-defying stunts, jaw-dropping  acrobats, all to a backdrop of heart-thumping music scores. Roughly, it charts the history of Canadian circus acts from Canada all the way to modern day which gives Barbu scope to perform a huge variety of acts from the hat juggling to acrobats. While some of the acts at the beginning of the show may be a little familiar, it’s no less mesmerising and Barbu really starts to shine when the cabaret kicks in injecting personality to the show. There’s aren’t many shows where performers beards are so well-groomed, involves a cask of beer spraying everywhere or a ball strapped to a chest whilst performing acrobats at dizzying velocity. It’s witty, fun, and unapologetically revels in its silliness. 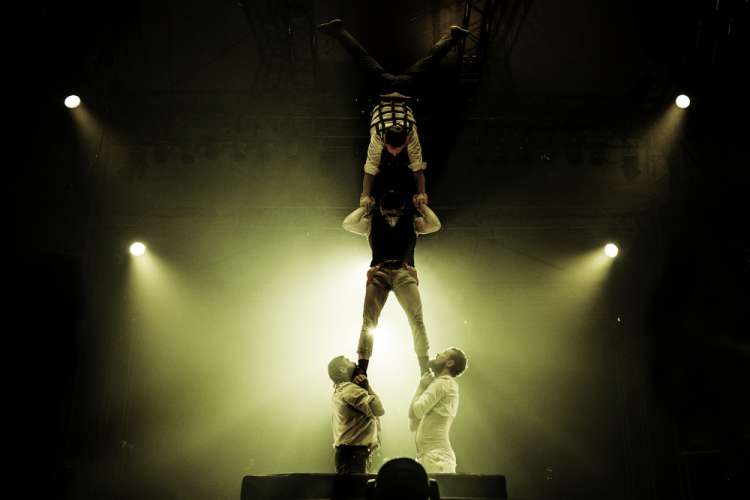 I’ve seen many risque cabaret shows in my time, but this is one of the few that had me gripped with awe for pretty much every act. It’s naughty and guiltily fun. For those susceptible to a bit of silliness blended with edge-of-your-seat stunts, wits and fab music, then this is a must-see. Hurry though, as it’s London only the 25th September 2016.

It's cold outside so all I want to do is slurp some noods and soup dumplings. Till we meet again after lockdown 3.0 @dintaifunguk
For me, Pizza Pilgrims @pizzapilgrims does some of the best pizzas in London. I mean, just look at this spread 😍🍕 Dreaming of the day when I can stuff myself again with slices of their DOUBLE PEPPERONI WITH HONEY or SPICY NDUJA pizzas. PUTTANESCA ain't bad either with all SALTY ANCHOVY GOODNESS hmmmm 😋
It isn't often I choose a veggie side instead of the regular crinkle-cut fries, but shout-out to the DF SLAW over at @dftacosuk in Shoreditch for being absolutely banging. VIBRANT, TANGY, and CRUNCHY AF.
This fully loaded chicken souvlaki from @theathenianuk 😍 Dunno why this didn't get posted along with the rest - probs deserve a single post on its own, it's that sexy 😂😋
It may have just opened, but @coqbullsoho is already one of my favourite restaurants in Soho.
It's been hard year for all in the hospitality industry, so I want to shine a line of some of the awesome restaurants that you should definitely dine at when you get the chance.
Who reckons they can polish of this 1kg sharing platter of chicken wings and a Guinness by themselves? 🙋‍♂️
The best burger in London? For me, right that title belongs to @black_bear_burger. Aged beef patty, cheese, bacon, onion jam, garlic mayo sandwiched between a beautiful seeded brioche bun 🤤 I'd walk a million miles just for this 😅
In my final post of my #famousfives series, I am taking you down a flight of stairs in Petticoat Lane, and into a quirky, cosy underground cocktail bar. The Discount Suit Company @discountsuitco is a former tailors stockroom with bare brick walls and low-lit settings in Shoreditch, East London. Not only are the cocktails on point, but the decor is a fine nod to this establishments history as a tailor. There's nothing to draw you in, you really have to be in the know about this secret bar. Support these guys and pay a visit when all this virus crap is over.
#FAMOUSFIVES
#FAMOUSFIVES
#FAMOUSFIVES
#FAMOUSFIVES
Now, this is my kind of cocktail 🍹This Kiwi Sour is refreshing, fruity, and with a touch of the theatrics. Find it at the hidden gem in the City that is @barakarestaurantandbar. My review coming 🔜
Loading Comments...
Comment
×
%d bloggers like this: